A Gundagai Public School kindergartener with a family history of a genetic heart condition is the second-highest fundraiser nationally in the Heart Foundation’s Jump Rope for Heart program.

Jump Rope for Heart is a skipping and fundraising program run in Australian schools throughout the year. It encourages kids to have a positive attitude towards exercise, healthy eating and heart health, while raising vital funds to fight heart disease.

Gundagai Public School is a long-time supporter of the program. This is the eighth year the school has taken part, raising a cumulative total of almost $40,000 for the Heart Foundation.

In 2020 alone, Gundagai Public students have skipped more than 318 hours and raised about $18,000, smashing their $2,000 target. This is an amazing feat, especially considering the school has only 160 students. They are currently the fourth-highest fundraising school in the country. 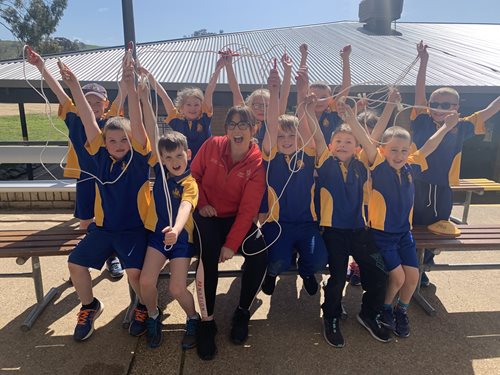 A significant proportion of school’s funds this year has been raised one inspiring, five-year-old kindergarten student, Abi Pigram. Abi lives with her parents, Mark and Iris, and younger brother, Calvin, on their farm near the village of Nangus, which is 24 kilometres west of Gundagai.

Over the six weeks of her school’s Jump Rope program, Abi has skipped a total of about 14 hours hours and raised an impressive $7,423. This makes Abi the second-highest individual Jump Rope fundraiser so far this year in all of Australia!

Abi’s relatives, in particular, have got behind her skipping efforts, as her family has a history of a genetic heart condition called hypertrophic obstructive cardiomyopathy (HOCM). This leads to the muscle in the wall of the heart growing and thickening to the point that it blocks blood flow leaving the heart.

Abi’s paternal grandmother, Linda, had HOCM and was very ill before receiving a heart transplant in November 2007. Linda’s mother, brother and a sister all died from the condition.

Mark Pigram does not know whether he has inherited the condition. However, at 32 he has no symptoms and regularly sees a cardiologist, who has given him a clean bill of health.

“Abi is too young to be told in detail about HOCM, but she does know that a healthy heart is important, and she has been skipping every day to help fight heart disease,” Mark said.

“Iris and I could not be more proud of Abi! We always knew she was a little champion, but to be putting in this much effort and raising so much money for the Heart Foundation in her first year at school is fantastic. Iris has also been working hard behind the scenes to support Abi’s skipping and fundraising efforts. It means a lot to our family, especially my mum.”

Schools that participate in Jump Rope mark the end of the program with a “Jump Off Day”. This gives students a chance to show off the skipping skills they have learned throughout the term. Gundagai Public staged its Jump Off today (Friday 28 August 2020).

“We had a fun morning of skipping, as we celebrated our Jump Rope achievements. The kids were so excited!” said Gundagai Public School Principal, Vicki Somerville.

“We set only a modest fundraising target this year due to hardships caused by coronavirus, but as you can see from this outcome, we have a very generous school community. It’s been terrific to teach the kids about healthy hearts while also raising money to prevent and treat heart disease.”

“As these kids discovered, Jump Rope for Heart is lots of fun and great exercise, but it also helps the Heart Foundation in its important work funding lifesaving research and health projects.

“Heart Foundation-funded research has helped make big advances in the prevention, diagnosis and treatment of heart disease over the past six decades, including genetic conditions.”

This year has posed some challenges for the Jump Rope for Heart program, with the coronavirus pandemic disrupting schools across the country, Professor Shilton said. “In response, we have developed new ways to engage with teachers, kids and parents,” he said. “This includes some terrific online videos about skipping and heart health, as well as instructional videos on how to do neat tricks like the ‘Criss Cross’ and the ‘Awesome Annie’.”

Jump Rope for Heart is one of Australia’s favourite school physical activity programs, inspiring kids to embrace skipping as a fun way to get active.

Since the program’s inception in 1983, more than 10 million Australian kids and more than 90 per cent of Aussie schools have taken part in Jump Rope for Heart. In that time, schools have raised awareness and more than $104 million to help the Heart Foundation fight heart disease – Australia’s single leading cause of death.

Teachers who are interested in registering their school for Jump Rope for Heart can sign up here.

/Public Release. The material in this public release comes from the originating organization and may be of a point-in-time nature, edited for clarity, style and length. View in full here.

Fri Aug 28 , 2020
Apple and Facebook are fighting again, and how you feel about it says something about who you trust to represent your interests in the strange tech landscape of 2020. Start with a rather academic question that may make your eyes glaze over in spite of yourself: When does pro-privacy regulation […]